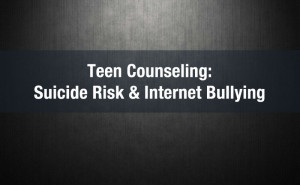 Never Underestimate the Impact of Internet Bullying on Teens

Counselors who see teens and adolescents have seen a dramatic surge in suicide risk associated with bullying, particularly internet bullying. Cyberbullying is associated with increased anxiety and depression in teens, and with our increasingly connected world the possibility that your teen is at risk is high.  Teen counseling experts weigh in on the topic in this article on ABC News:

Being bullied or spending an excessive amount of time on the internet could increase the risk of teen suicides, according to a new study released today by the American Academy of Pediatrics.

Though the overall suicide rate among teens has decreased since 1990, it was still worryingly high in 2013 — 1,748 per 100,000 teens between the ages of 15 and 19 — meaning suicide is the second-leading cause of death for teens, according to the study.

In addition, boys were more likely to die by suicide but girls were nearly twice as likely to attempt suicide, the study found.

And while suicide affects all racial groups, American Indian/Alaska Native males had the highest suicide rate and black females have the lowest rate of suicide, according to the study.

Additionally, the researchers found that more than five hours of internet use a day could signal a sign that a teen is struggling. They found a “pathological” level of internet use could indicate higher levels of depression, and the likelihood of completing suicides, though in some cases the internet could help teens feel more accepted.

If a parent is concerned that a child is suicidal, the parent should stay with the child and call a professional immediately and remove or hide dangerous items such as kitchen knives, guns, medications and car keys from the house, Cantor said. They can also ask a teen directly if he or she is having suicidal thoughts and stay watchful even if the teen denies it, Cantor added, noting that it’s key that parents listen if they suspect a teen is depressed or suicidal rather than lecture them.

Parents should never minimize the risk of suicide in their teens and children.  Open lines of communication help involved parents to spot the warning signs of teen depression and anxiety related to bullying early, and those parents who get their teens in to see a professional counselor who specializes in teens have a strong chance of identifying the causes and developing strategies that help teens avoid and cope with bullying behavior.

If you’re interested in setting up an appointment for your teen, or if your school has asked that your teen see a counselor, contact us right away at 248-595-9969 to schedule an appointment.