What You Need to Know About Anxiety Disorders

Dr. Adam Pasciak
anxiety counseling, anxiety treatment near you
Off 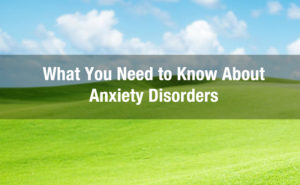 Anxiety is a normal human emotion that everyone experiences at times. Many people feel anxious, or nervous, when faced with a problem at work, before taking a test, or making an important decision. Anxiety disorders, however, are different. They can cause such distress that it interferes with a person’s ability to lead a normal life.

Generalized Anxiety Disorder (GAD)
GAD affects 6.8 million adults, or 3.1% of the U.S. population. Women are twice as likely to be affected as men.

Obsessive-Compulsive Disorder (OCD)
2.2 million, 1.0% Equally common among men and women. The median age of onset is 19, with 25 percent of cases occurring by age 14. One-third of affected adults first experienced symptoms in childhood.

Panic Disorder
6 million, 2.7% Women are twice as likely to be affected as men. Very high comorbidity rate with major depression.

Posttraumatic Stress Disorder (PTSD)
7.7 million, 3.5% Women are more likely to be affected than men. Rape is the most likely trigger of PTSD: 65% of men and 45.9% of women who are raped will develop the disorder. Childhood sexual abuse is a strong predictor of lifetime likelihood for developing PTSD.

Social Anxiety Disorder
15 million, 6.8% Equally common among men and women, typically beginning around age 13. According to a 2007 ADAA survey, 36% of people with social anxiety disorder report experiencing symptoms for 10 or more years before seeking help.

Specific Phobias
19 million, 8.7% Women are twice as likely to be affected as men. Typically begins in childhood; the median age of onset is 7.

What Are the Symptoms of an Anxiety Disorder?

Symptoms vary depending on the type of anxiety disorder, but general symptoms include:

How Are Anxiety Disorders Diagnosed?

How Common Are Anxiety Disorders?

Anxiety disorders affect about 19 million adult Americans. Most anxiety disorders begin in childhood, adolescence, and early adulthood. They occur slightly more often in women than in men, and occur with equal frequency in whites, African-Americans, and Hispanics.

If you or a loved one are suffering from feelings of anxiety, you’ll benefit greatly from an appointment with one of the many skilled counselors at Lake Orion Counseling Center.  Conveniently located in Clarkston, you’re just a short drive from taking a giant leap toward a healthier you.